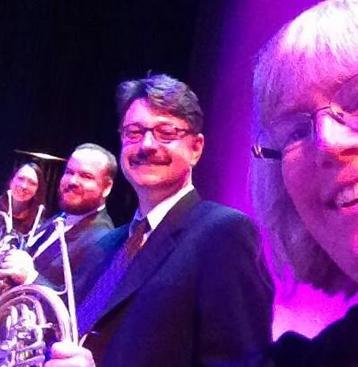 Whether a producer wants a certain style, or an artist needs a bold song cycle, I listen to their needs and create music in line with their vision.

I do it right!

I then wrote school performance music and instructional method books while working in music publishing for over 20 years. I've now returned to my roots of writing for film, commercials,  concert music, and opera.

I started playing piano and double bass at an early age, and I was writing large-scale pieces in high school. After graduating from the USC Thornton School of Music, I wrote for films and commercials while also writing concert music.

Deadlines, quality, and keeping on budget are always top priorities for every project.

When I comissioned the opera [Golondrina], I had no idea L. C. would write an opera that would hold its own next to Puccini and Verdi. I've produced it twice in the last three years!

L. C. Harnsbergeris an accomplished composer, author, and arranger. He received his B.M. in Music Composition from the University of Southern California where he studied with internationally respected composers and arrangers including Morton Lauridsen, Stephen Hartke, and William A. Schaefer.

Mr. Harnsberger has written and arranged for wind ensembles, orchestras, chamber ensembles, solo instrumentalists, and singers. His orchestral and band works have been performed across the United States and abroad and his first opera "Golondrina" has been performed multiple times in California. Three of his film scores for classic vintage silent films were played live with full orchestra.

His published works include best-selling music for band, full orchestra, solo piano, chorus, reference books, and method books, with some translated into multiple languages including German, and Korean. He is currently working on a new opera to be performed in 2023.